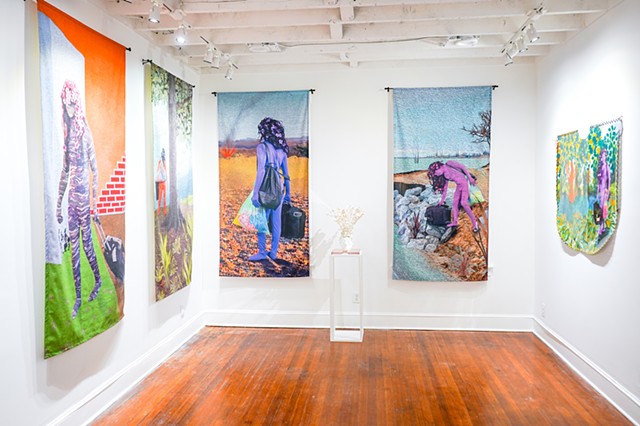 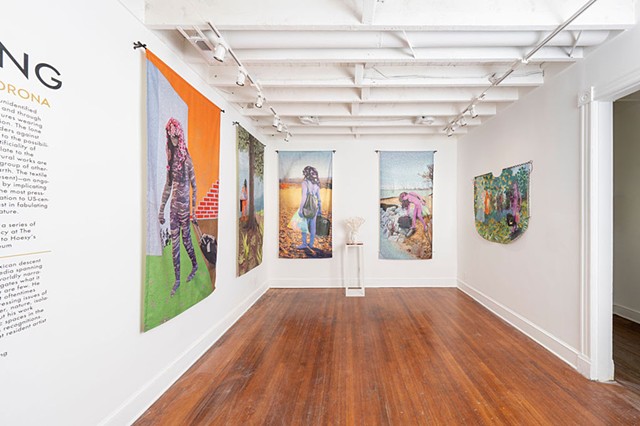 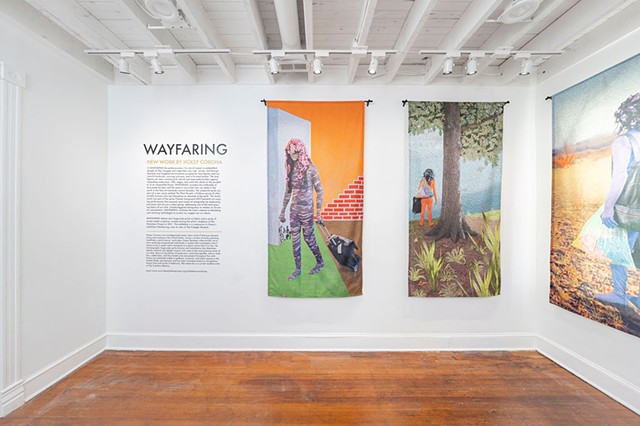 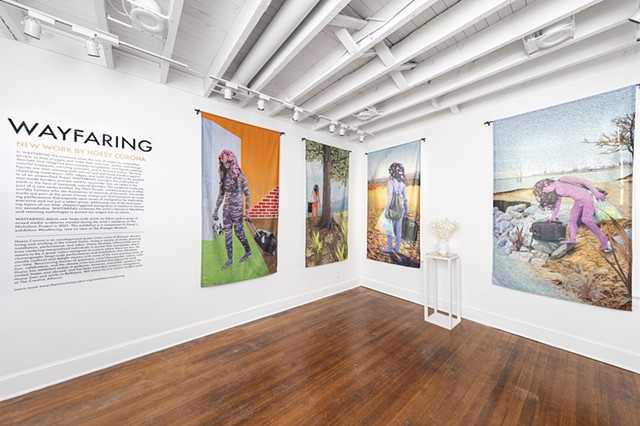 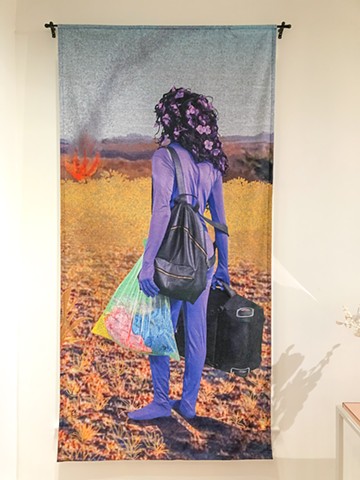 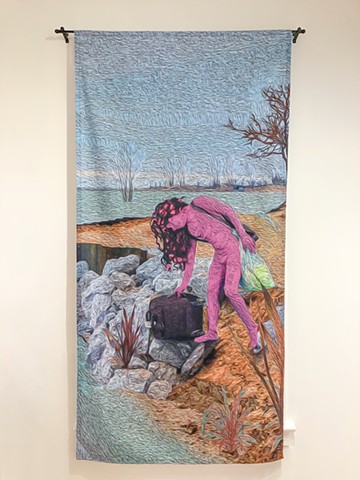 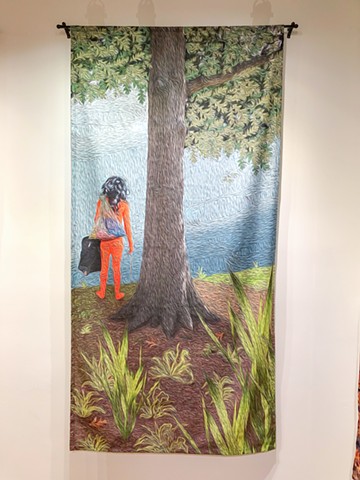 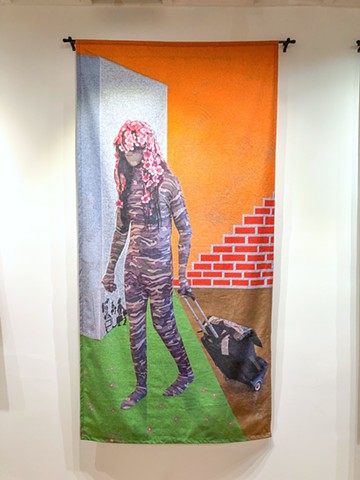 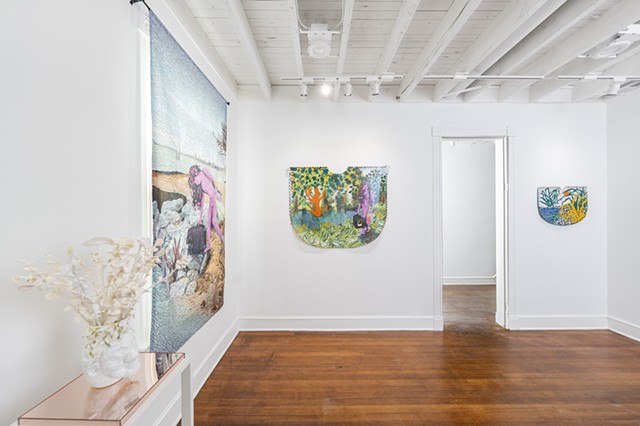 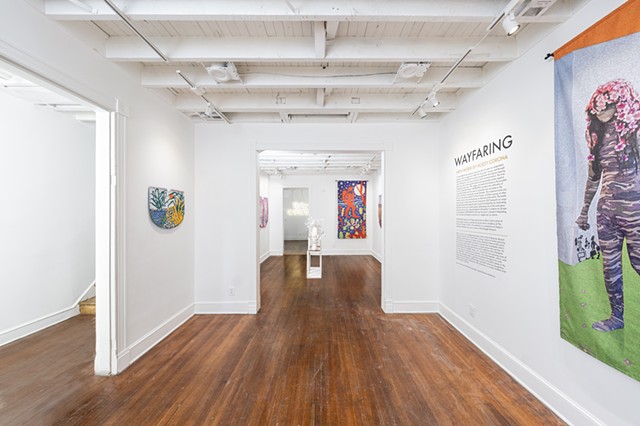 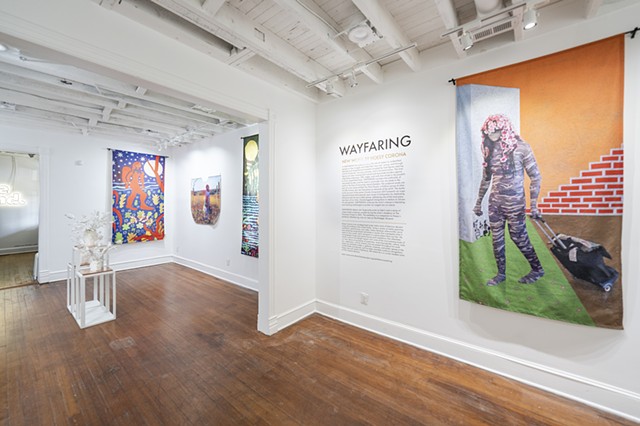 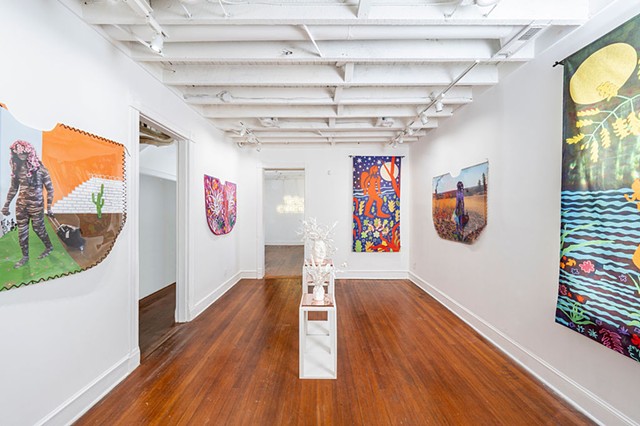 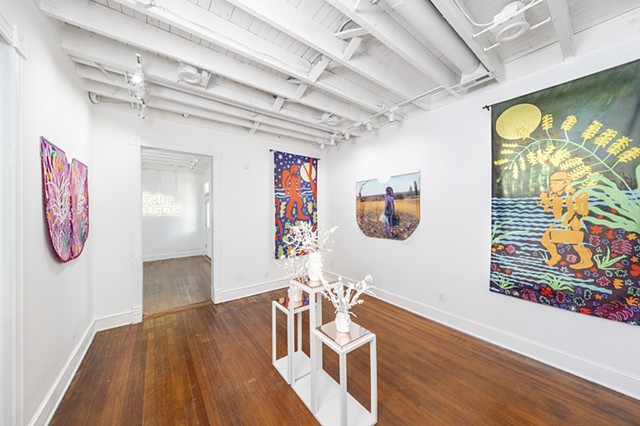 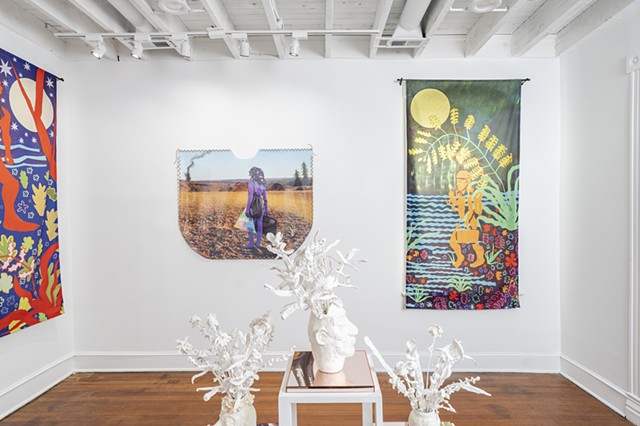 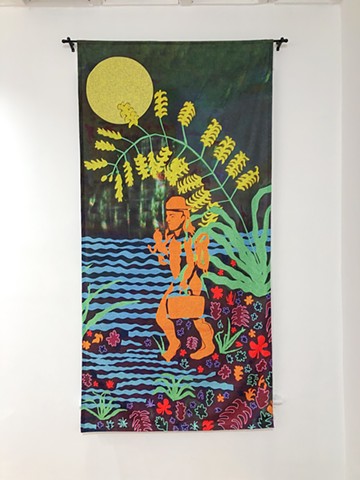 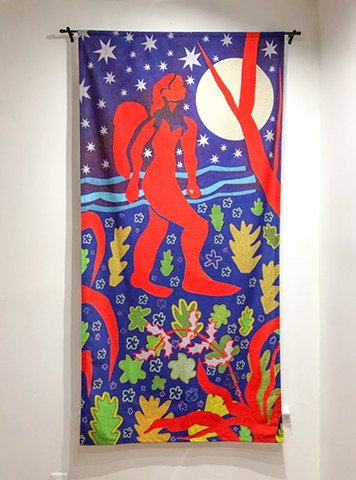 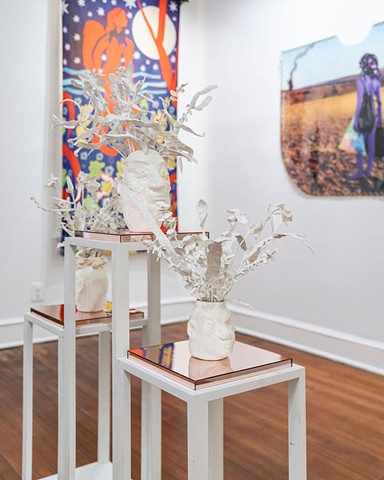 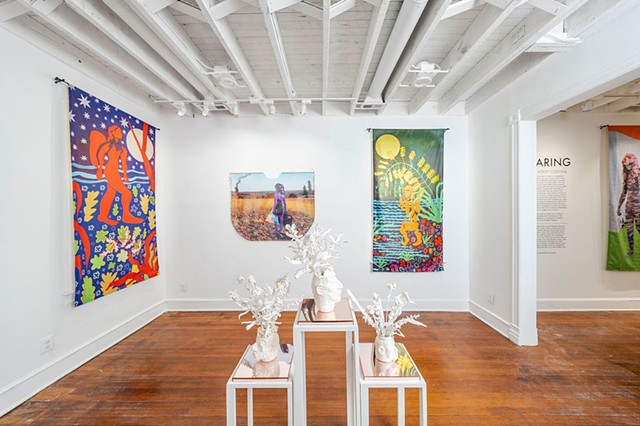 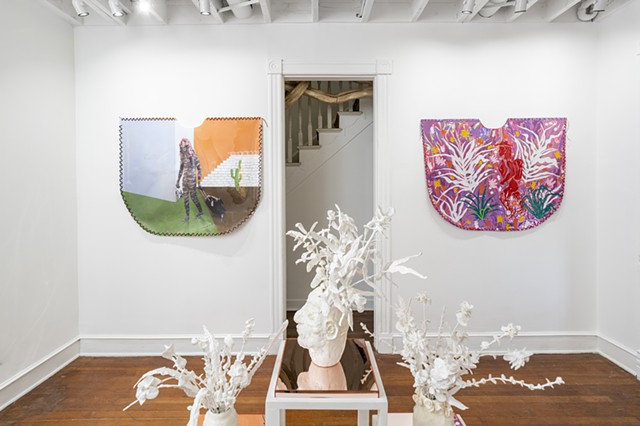 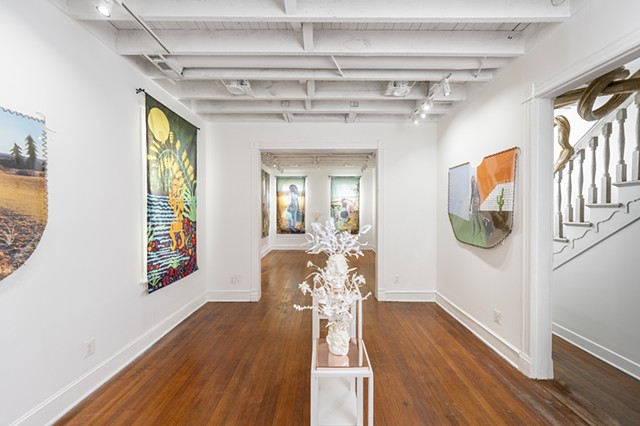 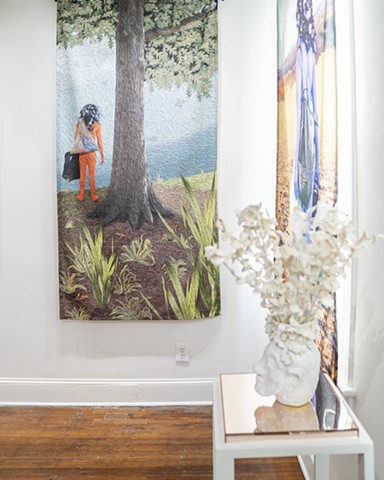 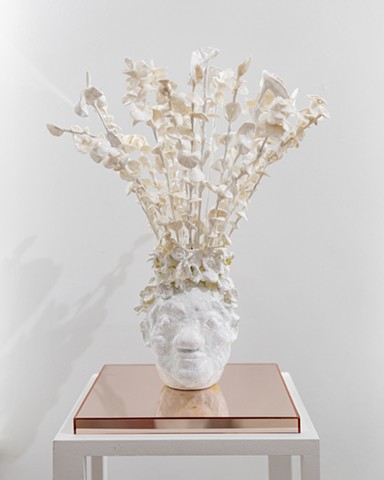 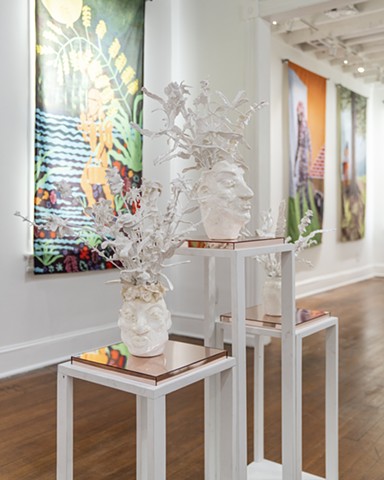 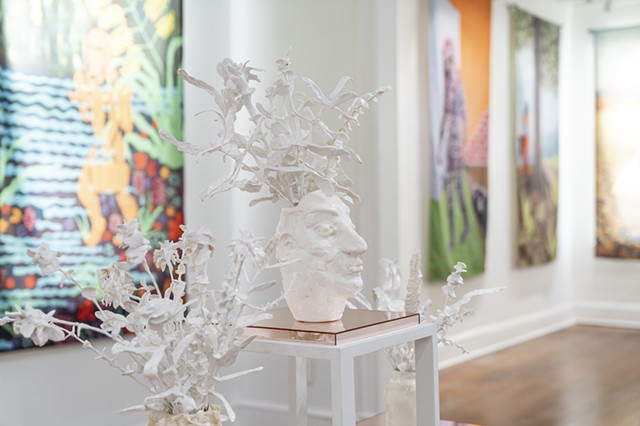 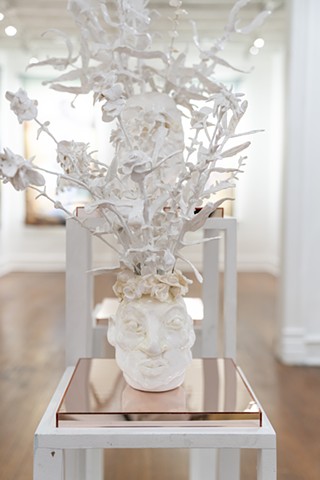 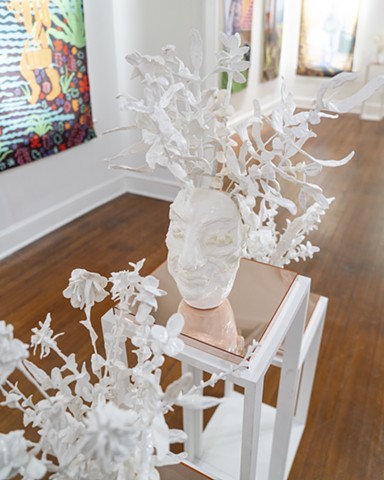 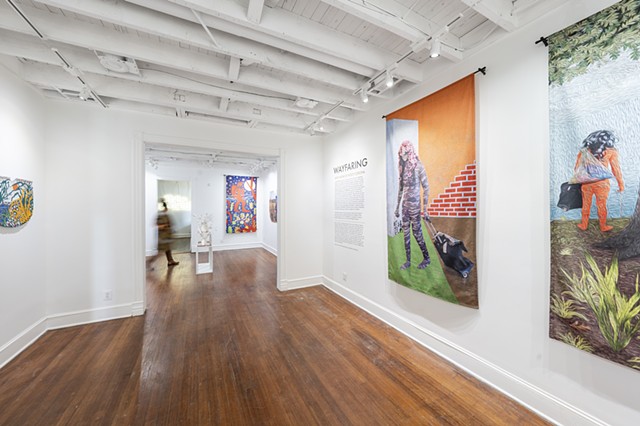 The Nicholson Project is proud to present WAYFARING, a solo exhibition by Hoesy Corona. On view from January 20th through March 12th, 2022, the exhibition will debut new large-scale prints on fabric and a series of mixed media sculptures created during the artist’s residency at The Nicholson Project in 2021. In WAYFARING the audience plays the role of voyeur to unidentified people as they struggle and make their way over, across, and through desolate and imagined environments occupied by lone figures wearing colorful bodysuits, carrying suitcases, and in forward motion. The lone figures are seen crossing both natural and man-made borders against impending waterways, cliffs, edges, and walls that allude to the possibility of an unspecified threat.

WAYFARING considers the artificiality of man-made borders and the need to reconsider how we relate to the earth in the face of manmade natural disasters. The sculptural works are part of a new series entitled The Plant People, a fictitious group of otherworldly humans who see themselves as stewards of the earth. The textile works are part of the series Climate Immigrants (2017-present)— an ongoing performance that expands upon issues of immigration by implicating everyone and not just a select group, addressing one of the most pressing topics of our time: climate-triggered immigration in relation to US-centric xenophobia. WAYFARING continues the artist’s interest in fabulating and remixing mythologies to protest our waged war on nature.

This exhibition is a companion to Corona’s exhibition Weathering, on view at The Kreeger Museum from December 2021 through March 2022.

photos by The Nicholson Project | Anne Kim Photo | the artist